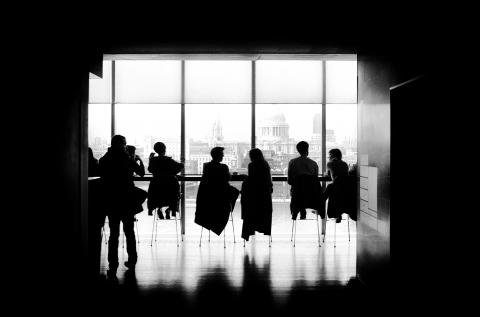 Recently, my colleagues and I were asked to read a well known book, How to Win Friends and Influence People by Dale Carnegie. Carnegie bullet points how to deal with human behavior and backs up each point with a story. This book can be summed up in one phrase: You will achieve connection and intimacy with people when you put the other person’s feelings above your own.

The American culture values independence and privacy, believes that “time is money” and materialism is a sign of success. These values have a serious conflict to Carnegie’s methods, as he values success by human connection. How can we be the best, have the best, and make the most if we have to care about other people? And how does this work in the workplace?

The field of web development poses an interesting hurdle when creating relationships, as most developers are introverted and have specific hobbies/interests. Coding can be an individual occupation, which can make team building skills amongst peers and clients, a challenge. Yet, at the end of the day - people are people, and all long for connection and value. Carnegie pulled on some key components to human relationships both in personal and professional settings.

There were 3 major take aways for me from this book:

It’s easy to go into autopilot mode as we shuffle through our busy, task filled lives. So much to do, so little time, and we want things to go as quickly and smoothly as possible. The question “how are you?” has become a greeting rather than a question and if anyone says more than “good”, it’s difficult to keep our attention on their actual response because sadly to say, we really don’t care. In fact, I’ve found that it catches people off guard when you are genuinely interested in how they are without motive. How often do we receive phone calls and text messages from people trying to “catch up”, only to learn that they want or need something from you? Somewhere along the way, we’ve lost the art of authenticity.

As we pursue our personal goals in life, it’s clear we have little regard for how our end game effects others. Dale Carnegie talked much about this topic when dealing with conflict and bringing content within circumstances. He noted how when you lose an argument you lose and when you win an argument you lose a level of connection. He mentioned a man who had made up his mind to smile at his wife every morning regardless of how he felt and guess what? It improved his marriage. This is a great picture of how our emotions and behavior influence the people around us. Whether leaders in our families, or leaders in our workplace, learning how to change our actions to exemplify a better atmosphere is an important skill to have! Conflict flows from the top down!

Lastly, what you run after the hardest and are the most passionate about will become your identity. When money, intellect, progression of technology and success become the goal - human connection takes a back seat. Carnegie gave 2 prime examples of how genuine connection trumps all those goals. An older woman, who was selling her home wanted to give him a car of great value to her. Surprised, he suggested that she give it to a loved one since it had both physical and emotional value. She expressed that her family was waiting for her to pass so that they could have her things and she wanted him to have it because she knew he would appreciate it. Next, he told of a man who bred expensive quality show dogs that gave his family one of their dogs all because Carnegie took an interest in him and his hobby. In both scenarios, each party was intelligent being as that they were wealthy and successful.  We can see that money, success or personal gain of any kind were not a determining factor in their decisions. Each gave something not only physically valuable but something of a personal treasure to him without charge! Somehow in the rat race of life we’ve lost this simple truth: People want connection; they want to share something deeper than a surface conversation or casual business deal.

How do we combat this epidemic? It doesn’t require you to run out and share your life story with everyone you meet. Be intentional. Notice people’s countenance and take action once you’ve determined their attitude. Here’s the kicker...you ready...? Do things without an ulterior motive. This would be as small as saying “Good Morning” to a stranger, to sending a card in the mail. People aren’t looking for material attention - they can fulfill that need themselves. Behind our walls and years of fingerprints, people want to feel valued and of worth. When you ask someone how they are and genuinely listen without offering any motive you are saying, “You are worth my time and attention”.

Imagine what our world, companies and families would look like if that was our core value.