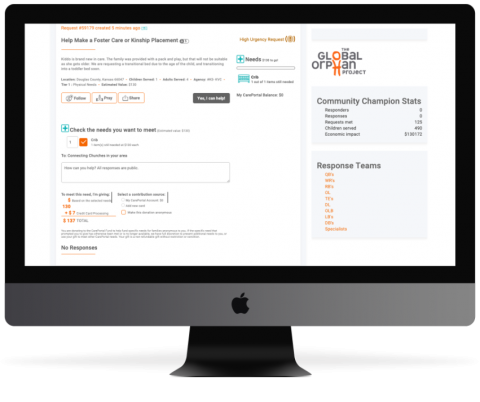 Coming off of these successful launches, Global Orphan began to study bottlenecks on successfully providing goods and services to families in need. Previously, providing goods to a family in need was sometimes cumbersome, involving unnecessary communication between responders, churches, and the agency in charge of the request. The need to streamline this process and give it an organic workflow was the vision that prompted the development of the CarePortal Card functionality.

The new CarePortal card implementation was designed to be simple from a user perspective. As people view current open requests in their community, they are able to see and select needs; either directly funding the needs by donating money, or committing to directly providing the requested items. A network of Connecting Churches across the country then takes the lead, and through CarePortal Cards that automatically transfer the donations immediately to the church, allows them to work directly with the family to provide the items needed. Since we completed the previous iterations of the CarePortal Laravel app, our team was well versed in the functionality of the system. We met with Global Orphan to plan out the project, spending time on discovery to ensure that every workflow, data model, role, and action was once again accounted for. This was an absolutely necessary step for the project, ensuring that all components remained operational, given that the existing app had a massive codebase and functionality. After discovery was complete, we met again to discuss our outline, gathered feedback, and signed a formal work agreement to begin work on the application.

Our first step in development was implementing API integrations for Stripe and Pex to allow them to interact with the CarePortal system. Once the app successfully communicated with both APIs, we built out the new functionality within the app allowing for agency requests, churches, and users to store funds on their accounts for later dispersal. We then tackled the process of modifying the request fulfillment process that allowed the funding of specific needs, including creating a universal request card to ensure that functionality remained consistent throughout the app. Since this impacted core system functionality, our developers spent a considerable amount of time working through the existing workflows to ensure that the entire system continued to function properly.

The next step we took in development was building out the process for churches to request and activate a PexCard, utilizing the Pex API integration we previously built. Upon activation of their PexCard, a new workflow was developed for churches to claim funds given towards requests in their area, allowing them to directly fulfill the needs which offloaded a considerable burden from the agency workers. When funds were claimed and approved, their pexCard spending limit was automatically updated to reflect the new available balance. We also created a webhook integration to create transactions and update the PexCard spending limit whenever church administrators used their cards at online or retail locations.

Our last step was to create new verification processes for church administrators to upload receipts and track time/money spent on fulfilling the request, ensuring maximum transparency and accountability throughout the process from responders to agency workers.

The new CarePortal Card functionality delivers a fully functional experience geared towards allowing average people to directly support agencies and foster children around the country through donations. On launch, this immediately provided thousands of dollars in donations, helping hundreds of at-need children while removing barriers that previously restricted the amount of help provided to children. As further integrations roll out, we expect that CarePortal will continue to be able to impact thousands of children through North America, improving their lives through the new integrations. CarePortal’s updated app elevates their brand, positioning them as a unique and important player in communities across the country. Countless family's lives will be improved daily through their efforts.