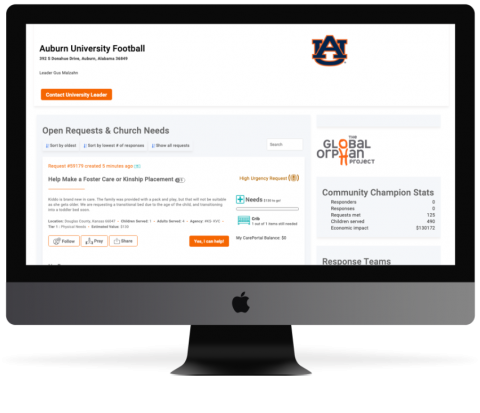 Coming off of these successful launches, Global Orphan began to study bottlenecks on successfully providing goods and services to families in need. One bottleneck that they identified was the inability of non-church organizations to fully interact with requests on a company-wide basis. They also discovered that churches, having one path to receive requests, were limited in the way they could interact with agency needs

The proposed plan to implement non-church organization interaction or Community Champions was designed to be simple from a user perspective and largely mirror the functionality that churches currently enjoyed. Champions would be able to enroll into the CarePortal system via a modified version of the existing church enrollment. Once they were enrolled, they would be able to fully fund, respond and interact with agency requests. Additional flexibility for the requests that organizations receive was expanded by the creation of multiple Response Teams. Each Response Team would now have the flexibility of custom-tailoring the requests they received,as well as allowing them to create custom memberships in each Team. This would allow for organizations to build response teams around groups that already existed in their organization, such as ‘Youth Groups’ or ‘Marketing Team’.

Our first step in development was modifying the existing church structure to allow for a flexible implementation of Response Teams. The app already had some limited group functionality that was largely unused that we decided to modify and adapt. Reworking the functionality, we added new app interactions allowing churches to manage members across multiple response teams, as well as adding new management roles within the organization. We then built out new backend settings allowing for each individual Response Team to customize the type of requests they would receive. Since this touched the core functionality of the app, we spent a considerable amount of time testing the new code to ensure all existing routes remained functional.

Our next step was modifying the existing church structure into a generic organization model. The existing enrollment workflow was modified to collect specific information based on the type of organization enrolling. When then modified the functionality available to community champions, restricting any specific church functionality while allowing them to fully interact with agency requests and Response Teams.

Our last step was to add additional request filtering for Community Champions. Since many organizations work across state lines, the option to gather and respond to requests outside of the immediate vicinity of their headquarters was key. We added additional settings to each Community Champion’s Response Team, allowing them to join critical need communities across the country and directly partner with Connecting Churches.

The new Community Champion functionality delivers a fully functional experience geared towards allowing organizations of all sizes and any affiliation to directly support agencies and foster children around the country through donations. On launch, this immediately provided thousands of new dollars in donations, helping hundreds of at-need children while removing barriers that previously restricted the amount of help provided to children. As further integrations roll out, we expect that CarePortal will continue to be able to impact thousands of children through North America, improving their lives through the new integrations. CarePortal’s updated app elevates their brand, positioning them as a unique and important player in communities across the country. Countless family's lives will be improved daily through their efforts.