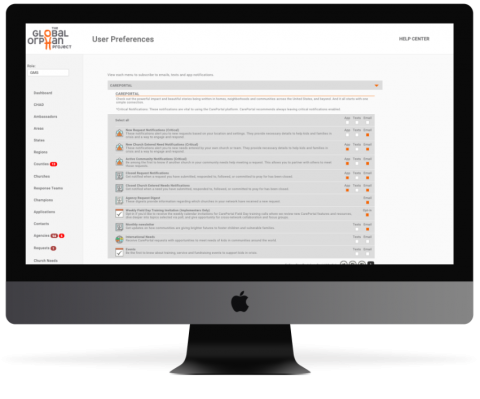 Coming off of these successful launches, Global Orphan began to study bottlenecks on user interaction. One major bottleneck discovered was the inability of users in the CarePortal app to quickly manage their notification preferences. Though this didn’t seem like a bottleneck at first, on further investigation it was discovered that users felt they had no transparency over the kind of emails they got, often-times leading them to fully unsubscribe from all marketing emails, which inadvertently limited notification of agency requests, often resulting in insufficient funding.

The proposed plan was simple: create a universal preferences landing page that displays all possible marketing communications the user could sign up for, along with transparent information as to what each opt-in would entail. Rolled into this was also the ability for users to control the type of notifications they received from the CarePortal app, allowing them to receive notifications in the way that worked best for them, either email, text or app.

Through the discovery, we planned the buildout and outlined every update that needed to be deployed, ensuring that new functionality would maintain and compliment existing workflows. We organized all work according to role and data model, so that specific models and roles that contained similar functionality would be tackled at the same time. Work was broken out by ticket and assigned in 2-week sprints, with client meetings occurring weekly to showcase progress and discuss new functionality.

Since we had already built out the backbone for users to receive multiple types of CarePortal notifications in previous projects, our first step was creating a form that displayed all possible notification categories while presenting the user with their current settings. Since this impacted how users received requests, we conducted extensive testing to ensure that notifications would continue to be received while respecting each user’s preferences.

Our next step was implementing a full SalesForce preference sync. Integrating into the SalesForce API, we were able to quickly pull and aggregate the preferences available, and map them to what each user had set up. We added descriptive form and fields to the preferences page with copy describing what each notification entailed. Once that was in place, we added new api functionality to store any changes in their SalesForce record, ensuring that all future marketing efforts would correctly respect their settings.

The new Preference Center functionality delivers greater transparency to an already fully functional app experience. On launch, this immediately gave thousands of users new flexibility to manage their notifications across the multiple organizations, apps and websites that Global Orphan manages, ensuring that notifications for needy children continue to be delivered to concerned community members nationwide. As further integrations roll out, we expect that CarePortal will continue to be able to impact thousands of children through North America, improving their lives through the new integrations. CarePortal’s updated app elevates their brand, positioning them as a unique and important player in communities across the country. Countless family's lives will be improved daily through their efforts.