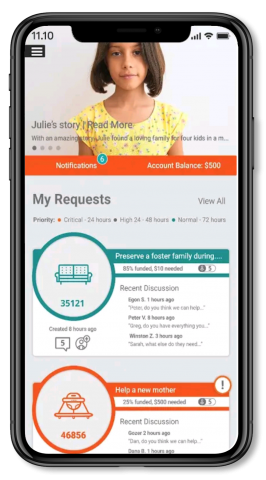 Coming off of these successful launches, Global Orphan began to study bottlenecks for church adoption of the CarePortal platform, also taking into account what potential features could help churches more effectively engage with their members and community. One of the biggest bottlenecks identified was the inability of churches and responders to fully engage with request on their mobile devices. It was this need that prompted the expansion of the CarePortal app.

The vision behind the expanded CarePortal app was simple: enable churches to manage their requests, members, and needs from a mobile device, including submitting needs, engaging and funding requests, and chatting directly with agency workers when needed. Showcasing the impact each church and responder was making in their community was also an important aspect identified by Global Operhan to drive continued adoption and use of the app.

Since we completed the previous iteration of the CarePortal Mobile app, our team was well versed in the functionality of the system. We met with Global Orphan to plan out the project, spending time on discovery to ensure that every workflow, data model, role, and action was once again accounted for. This was an absolutely necessary step for the project, ensuring that all components remained operational, given that the existing app had a massive codebase and functionality. After discovery was complete, we met again to discuss our outline, gathered feedback, and signed a formal work agreement to begin work on the application.

Due to the development flexibility and community support, we stuck with Google’s Dart/Flutter platform to expand out the CarePortal App. Our first step in development was creating the boilerplate infrastructure of the church/responder side of the app, allowing us to quickly showcase progress. The next step our developers took was to take the existing paths and functions within the web application and modify them for use in the mobile API while keeping existing functionality intact.

Since this impacted important system functionality, our developers spent a considerable amount of time working through the existing workflows to ensure that the entire system continued to function properly. We also continued to consolidate code throughout the system into new single-use action classes. This consolidation took a myriad of CRUD action implementations throughout the app and moved them into single universal functions. Making these changes both cut down on development time and also enabled a more stable system for the future.

We then began to develop new functionality for the app. This included a streamlined member management form with the ability to move members between multiple response teams, as well as full request interaction that users had grown to expect from the existing web app. Allowing mobile funding of requests, as well as church-request interaction was a top request from the field, helping churches quickly pinpoint and work with agencies in need.

Since effective communication between agency workers and supporting churches, as well as inner-church communication, is key to meeting needs and requests, we expanded out the custom chat system within the app. Our developers modified our secure system from the ground up, integrating existing communication workflows (such as email replies) into the chat system.

We also expanded the joy wall functionality celebrating personal and church impact in the community, as well as fully integrated the newly created Community Champions into the app. Lastly, we worked with the design-time at Global Orphan to develop a refreshed them for the entire app that closely aligned with their brand standards.

The updated CarePortal App delivers a fully functional mobile experience geared towards churches, organizations, and responders, allowing them to fully interact, fund, and engage with their own community better. Adoption of the CarePortal App provides users immediate familiarity with the CarePortal functionality while removing vital barriers to adoption. Chat was integrated into the app, and functionality was expanded across the board, ensuring that people in need get help in a quick and timely manner. Churches and individuals are more engaged and able to create a better community for everyone. CarePortals new app elevates their brand, positioning them as a unique and important player in communities across the country. Countless family's lives will be improved daily through their efforts.