The Eisenhower Foundation non-profit was formed in 1945 after the Allied victory in Europe to create a memorial to General Eisenhower and includes his boyhood home as well as the museum and presidential library which was opened in 1962.
Download Case Study
Visit Website 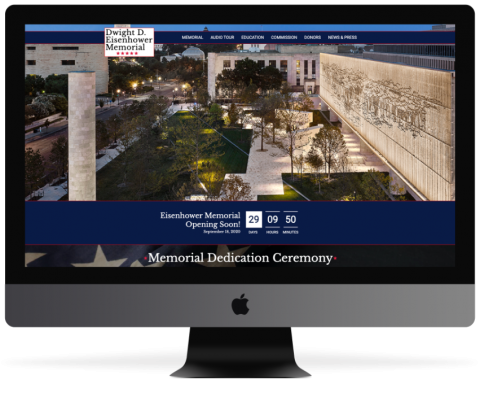 The Eisenhower Memorial Commission approached us with an existing, fully functional website dedicated to the soon to be finished Eisenhower Memorial in Washington DC. The existing website was created over a decade ago with minimal changes since then. It was visually out of date, and the absence of a mobile-friendly theme precluded many visitors from fully utilizing its resources. Due to the impending dedication of a new national memorial for Dwight Eisenhower, the Memorial Commission sought to refresh their web experience so it would both engage and inform the public on Eisenhower’s legacy.

With the imminent launch of Eisenhower’s National Memorial, the Commission knew there would be an increased interest in IKE’s legacy along with higher traffic to their website. Since the Eisenhower Commission is supported by public funds, having a well-crafted development plan is key to ensuring proper funding for a timely launch.

Our team initially met with the Eisenhower Memorial Commission to discuss the project and goals. Our first step was to create a cohesive, modern design that was both functional and properly paid tribute to the legacy of Dwight D. Eisenhower. We worked with the Commission on several iterations of the design until we reached an agreement on the final design.

Once we started development, our first task was to make the existing website fully mobile-friendly. We modified the existing theme to allow for responsiveness across multiple platforms. Since this impacted important system functionality, our developers spent a considerable amount of time to ensure that the entire system continued to function properly as we made it mobile-friendly.

Our next step was to create the additional content types that the Memorial needed, including upcoming events and countdowns to the opening ceremonies.

We then began to develop the new theme, applying it to the site framework before focusing on internal pages. Once the new design was applied to the site’s framework, including the universal menu, headers, and footers, we began to focus on conforming the inside pages to align with the new brand standards.

We also focused on creating a new home page for the Memorial, including a countdown to the Memorial’s opening, as well as upcoming event information for the opening ceremonies, all prominently displayed for the public.

Throughout the buildout process, our project managers QA’d features and functionality on the website as they were created and pushed to our development server. We regularly handed off sections of the site to the client for QA, ensuring that everyone had tested and signed off on the style changes prior to launch.